We’ve just released a new minor version of DotVVM – the version 2.5. It took longer than we expected, but there were several fixes and features we wanted to squeeze in this release.

DotVVM 2.5 brings several new features which may simplify the use of DotVVM in older ASP.NET Web Forms projects, as well as significant performance and stability improvements.

The main improvements were already present in the Preview 2, but let’s remind them here.

Those of you who tried to install DotVVM into an old ASP.NET Web Forms project probably run into several issues with incorrect project references. Until now, DotVVM tried to load all referenced assemblies (including transitive ones) and scan them for various things (namespaces in the @import directive, attached property declarations and so on). This was quite inefficient, and caused problems as the mess references often found in legacy projects prevented the application to run.

Now, it is possible to turn this feature on, and then explicitly list assemblies that DotVVM should work with:

Until now, all DotVVM views (pages, master pages and user controls) were compiled on demand - during the first request that needed them. This flow is great for developer inner loop as you typically work with just a few pages you are working on.

In production, you can take advantage of two new modes:

Sometimes it is useful to be able to register a route which makes a redirect. We’ve seen users writing their own IDotvvmPresenter implementations to do this, and so we added an easier way. You can now use AddRouteRedirection and AddUrlRedirection, which allows you to hook up on a URL you want to redirect, and specify a targer route or URL. There is also an option to process query string and route parameters so the opportunities are endless.

You can find a complete list of changes and fixes in the Release notes.

We also continue to improve the DotVVM for Visual Studio extension. Along with many performance & stability improvements, we’ve worked on several new features. Here is one of them:

We’ve also released a new feature of our Visual Studio extension – it’s called Add DotVVM, and it dramatically simplifies the process required to start using DotVVM in an ASP.NET Web Forms, MVC or other app.

Instead of having to install several NuGet packages, update the csproj file, create the Startup.cs and DotvvmStartup.cs files, the process now requires just one button click. 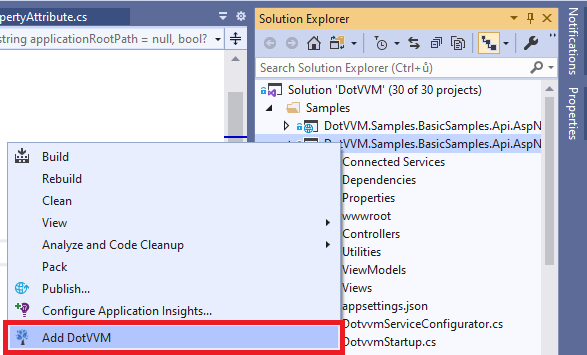 The team will now fully focus on delivery of DotVVM 3.0. There is one big feature we are really looking forward – the ability to write a client-side logic in TypeScript and be able to call it from DotVVM and vice-versa.

Imagine you want to display a Google Map on a page that is powered by DotVVM, and display a pin on the map based on some values in the viewmodel.

Until now, you’d have to create a script file, register it so it’s loaded after DotVVM, and then hook up to dotvvm.events.init and use something like dotvvm.viewModels.root.viewModel.CurrentLocation().Latitude(). And if you’d need to make a postback based on something that happened in the map, the only way was to use a hidden button and click on it using JavaScript. There was even not a way to determine whether the postback was successful or if there was some error.

We want to simplify this experience to something much easier.

In the page, you’ll be able to import a “JS module” (this is not a final name of the feature, but that’s how we call it right now):

Then, you can add a map.js file in the wwwroot/Scripts folder. Of course, you can use TypeScript that will create the JS file for you. The file should be a JS module that can export several things:

* init function that will be called after DotVVM is initialized

* commands – a JS object with functions that can be called from DotVVM controls using a static command:

There will be other things the module can export – custom postback handlers, handlers for DotVVM events and more!

Also, we plan to introduce a nice API that you can use to invoke postbacks and static commands in the page and update the viewmodel safely (we don’t want you to deal with Knockout observables as there are so many things that could be broken easily).

Join us on a virtual event on November 16 to learn more about DotVVM 3.0

Register to the online event

Your feedback is important to us. We’ll be happy to talk on our Gitter chat.